Hello and welcome back to my travel blog. For this trip, I’m going to talk about Tryon Palace in New Bern, North Carolina.  There are many things to do in eastern North Carolina, and a trip to the old governor’s palace is a must.  As a matter of fact, Tryon’s Palace is actually named The Governor’s Palace, New Bern, but local North Carolinian’s know it by the last name of the Governor who had the original dwelling built, William Tryon.

Tryon’s Palace was the seat of British Colonial governance from 1770 to 1775.  William Tryon; a British Officer and administrator for the Crown, governed North Carolina from 1765 until 1771.  He knew the importance of having a centrally located place of governance in the colony, and wanted the new residence to resemble other colonial British structures found in America at that time.

Although the new residence stood opulent in its regal elegance, controversy arose almost as soon as funding for building it was approved.  In order to pay for this new extravagant residence, extra taxes were levied on the people of North Carolina.  Most colonials felt over taxed as it was, and bucked under this new levy.  As a matter of fact, it caused a rebellion called The War of the Regulation.  Colonials actually took up arms against officials of the Crown, and many believe this rebellion was a catalyst for the American War of Independence.

William Tryon lived in the palace for only a year before leaving to become the governor of New York due to his unpopularity during this time of upheaval in North Carolina.  Another governor moved in, and the palace remained in British hands until American Revolutionary Forces took it in 1775.

Tryon’s Palace remained the seat of governance for Colonial forces until 1792.  At that point, newly independent North Carolina moved its capitol from New Bern to Raleigh, and the original palace was completely destroyed in a fire.  An important piece of American history was lost to the world for over 150 years, but original architectural plans were found in the 1950’s.  Knowing what kind importance and history the site held to the state and to the country, local North Carolinian’s rallied to have the main residence rebuilt; true to the original architect’s plans.

In 1959, the palace as we see it today was opened to the public, and we are more better for it.  It’s like stepping back in time.  A time when Kings reigned supreme, and a trip across the ocean took months, not the few hours that it takes now.

Your first part of the tour starts in the North Carolina History Center, and will end there as well because this is where you will park.  The North Carolina History Center is where you buy tickets to tour the grounds of Tryon Palace, but also houses two museums.  You can browse pictures and artifacts of North Carolina’s past at the Regional History Museum, as well as partake in interactive exhibits at the Pepsi Family Center.  After you finish visiting the museums, you can either walk to the palace or hop on a people mover to start your tour.

Once you arrive at the palace grounds to start your tour, you will be taken aback by a very much tangible relic of our colonial past standing right in front of you.  In the middle of a modern city, you will find yourself transported to a British Manor style residence, not unlike something you’d see in period piece movie about the Aristocrat class in Victorian England. 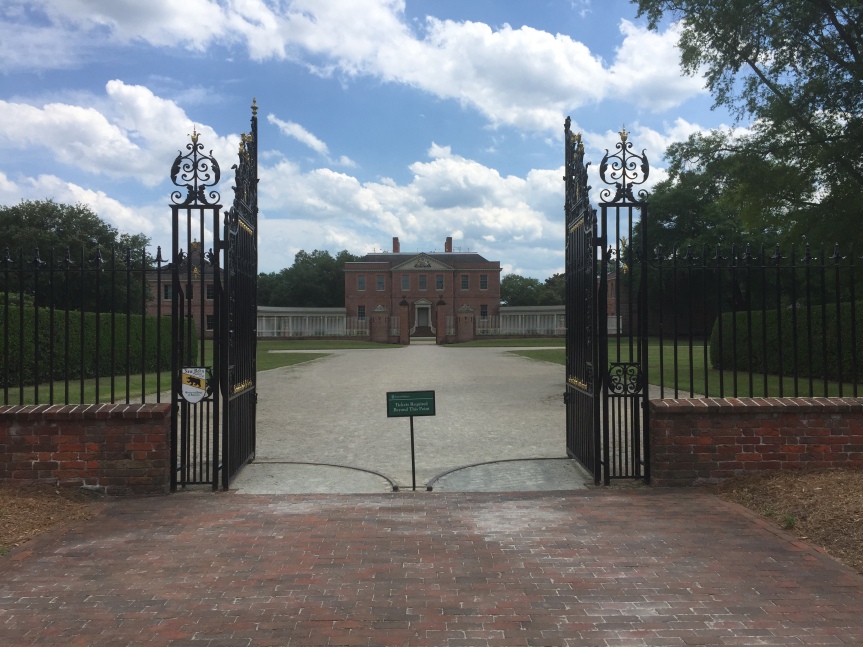 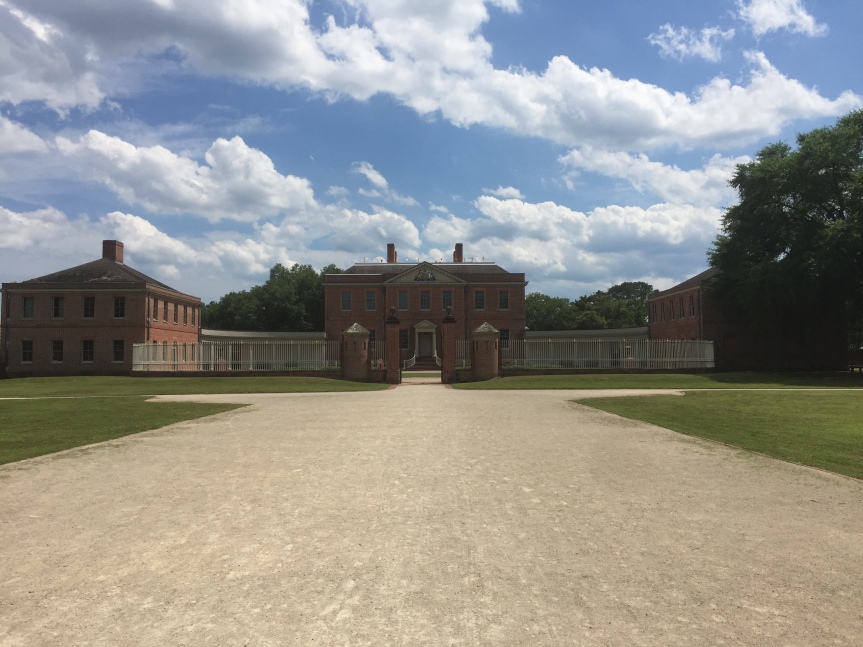 The main residence tour is guided, while the two other buildings are self guided tours.  One is the Kitchen Offices, and the other is the original Stable Offices; which is the only structure of the palace grounds that survived the fire in 1792.

The guided tour of the main building runs on a schedule, so if you miss out on one when you arrive, you’ll have to wait for the next tour to start.  Once it does start, you’ll enjoy a tour of what life in America looked like two centuries ago.  You’ll start the tour on the main level, roaming through libraries, offices, dining rooms, receiving rooms, etc. 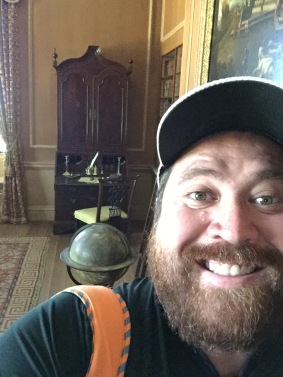 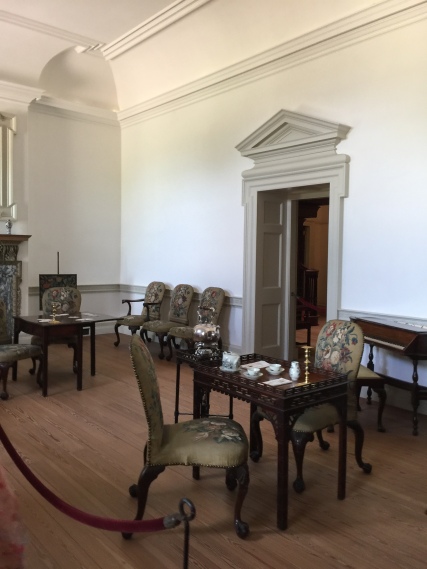 You’ll even be regaled with a portrait of the reigning King and Queen of the time when Tryon Palace was built; King George III and Queen Charlotte.  The last royal couple who ruled over the lands we now call the United States of America. 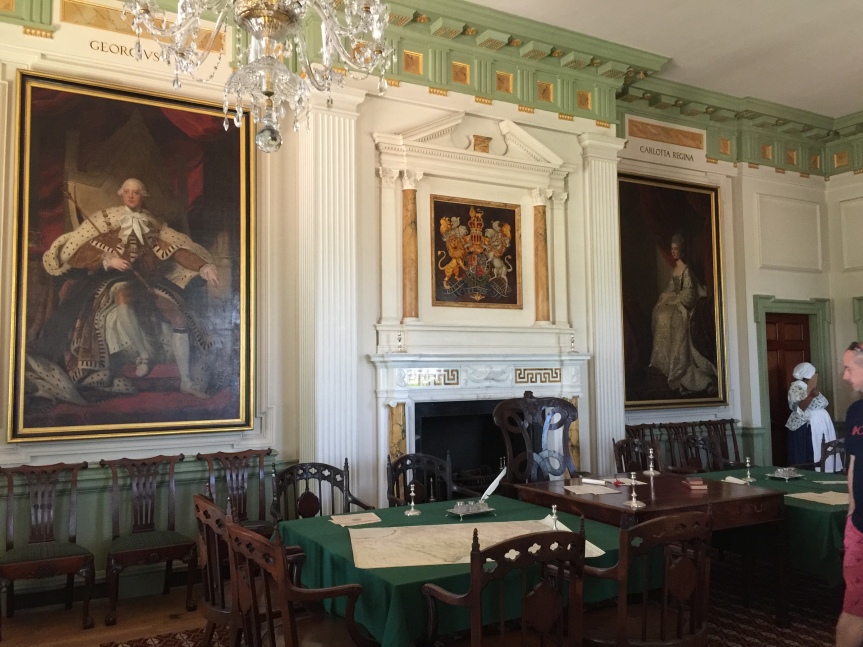 From there, you’ll head upstairs to the bedrooms and see what it was like to live just as the British upper class of the 18th Century did. 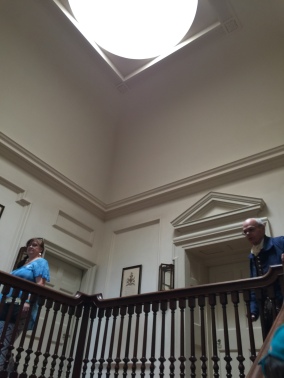 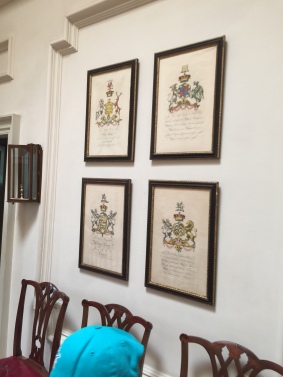 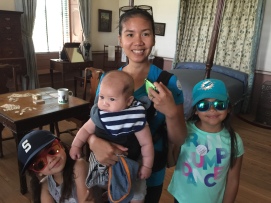 The palace is one of wonder and history.  It’s so historic in fact, that George Washington stayed at Tryon Palace as he traveled south during the Revolutionary War.  Another interesting historic note is that there was no indoor plumbing in the residence during this time frame.  There wasn’t an outhouse for residents of the main building to use either.  So, where did people go to relieve themselves when living in grandiose settings such as these?  Why the hidden chamber pot, of course!

You will note that the night stand beside the bed; with a pitcher on top of it, has a bottom drawer open.  This is where the chamber pot was held, so residents could discretely relieve themselves without having to leave the comfort of their own room.  File that under fun facts you learned today.

Much of the furniture and items you see throughout the residence are made to resemble actual items you’d see during the late 1770’s.  Many items were brought over from England, so it aids to the authenticity of the decor. 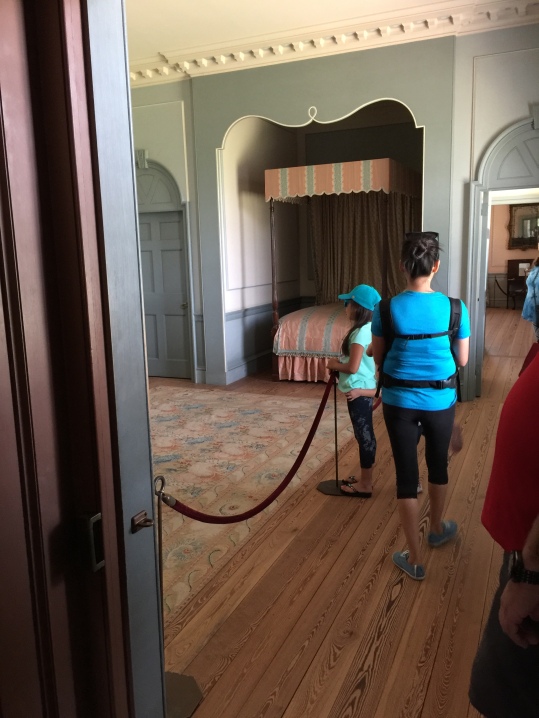 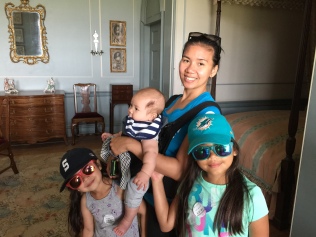 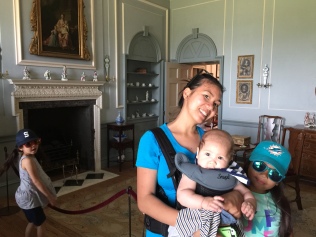 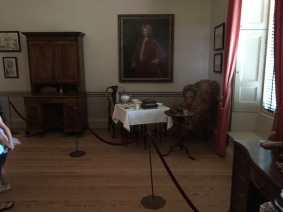 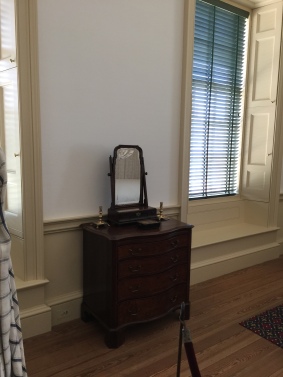 Once you visit the sleeping quarters of the governor, his guests, and his family, you will head downstairs to see the basement.  Here is where you’d find living quarters for the main members of the palace staff, as well as store rooms. 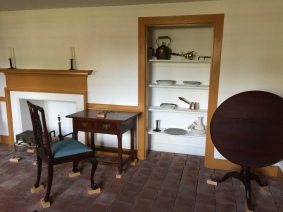 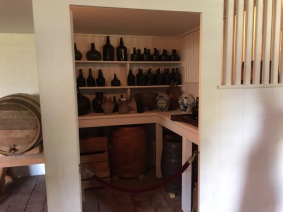 The guided tour ends there, but your visit is not over.  You can wander around the palace grounds at your own leisure to take in the sights, and to also explore the other structures.

There isn’t much to see of the Stable Offices, but it’s worth the time to visit just because it’s the only original structure there. 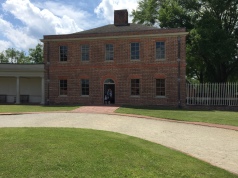 The Kitchen Offices are more interesting to see, because it has actors in period costumes working on site.  You also get to see the living quarters for much of the staff that worked in the governor’s palace. 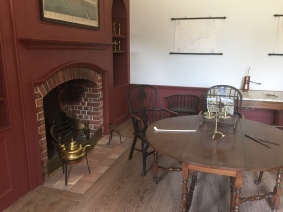 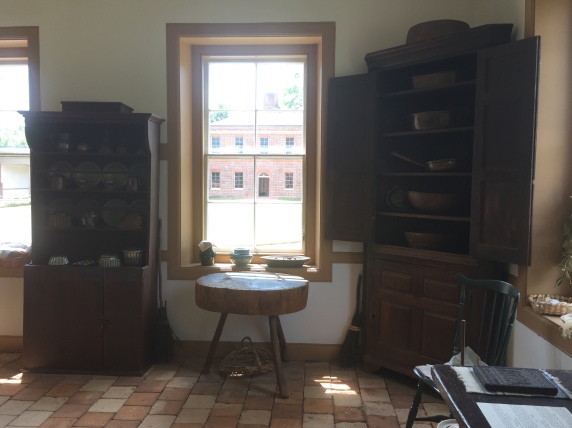 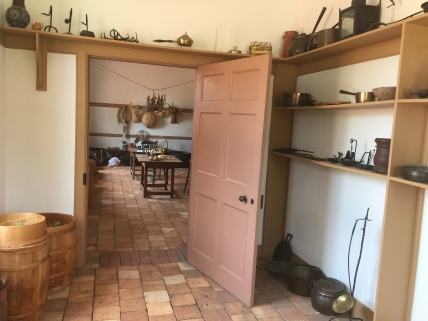 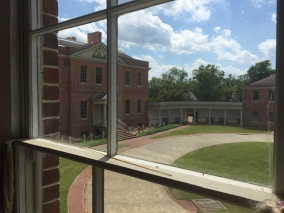 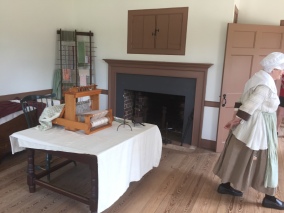 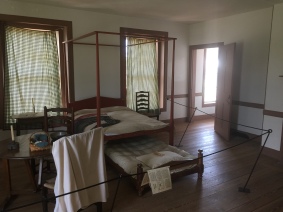 After seeing the Kitchen Offices, you can tour the grounds of the palace itself.  You can see the Neuse River, as well as a hedge maze. 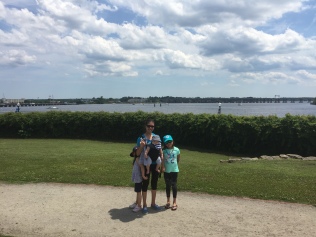 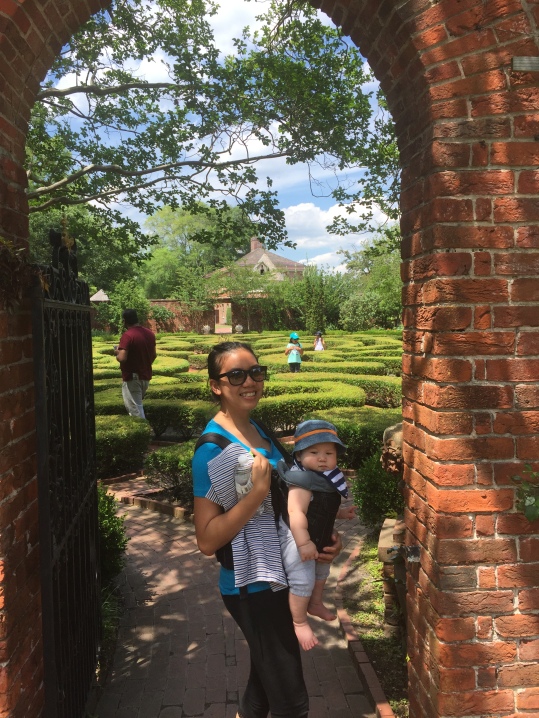 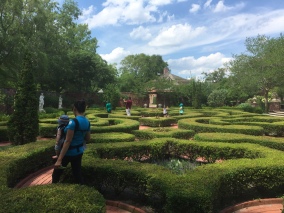 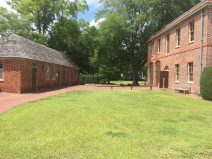 There are a few old houses to see near the palace grounds, but you should see the blacksmith before you leave if you’re too tired to see the near by structures.

That wraps up our tour of Tryon’s Palace.  If you’re ever in eastern North Carolina, make sure that this stop is on top of your to-visit list.  The great thing about visiting the palace is that you’re close to other sites to visit in New Bern once you’re done.  You can tour the birth place of Pepsi-Cola as well as eat some ice cream at the Cow Cafe.  You can take in local wares at the market, roam the store fronts, see New Bern’s famous bear sculptures, and wind down with the family at Union Point Park on the Neuse River.

All content and images are owned by Paul Russell Parker III.  Copyright 2018.  All Rights Reserved

The Sambac Crystal and The Stolen Kingdom

The Sambac Crystal and The Stolen Kingdom

Cash Me Out Life and Death in Paradise

Cash Me Out Life and Death in Paradise

All In: The Globe Trot Shuffle

All In: The Globe Trot Shuffle

The Buildup to Operation Intense Freedom

The Buildup to Operation Intense Freedom

The Aftermath of Operation Intense Freedom

The Aftermath of Operation Intense Freedom

My Book of Poetry: Select poems by an Iraq War Veteran

My Book of Poetry: Select poems by an Iraq War Veteran

Take a look around